The Taste of Cow Brains, and Writing What You Know

The following is published in Southern Writer's Magazine this month. In case you don't read that magazine, this is for you!

Most writers out there will likely never have a scene where a character tries eating cow brains. So why am I bringing it up?
Because I have. I lived in Bangladesh for two years, and during those years I got to ride rickshaws, take pictures of goat heads lined up for sale at the market, wear six yards of silk in equatorial heat, and yes, eat cow brains (and bone marrow in case you’re impressed). I also got to experience a new culture and learn that the way I think isn’t the only way to think, and the way I view the world isn’t the only way to view it. Branching outside myself into that new world has broadened my horizons significantly as far as writing possibilities—not just topics, but in creating multidimensional characters utilizing the vastly different perspectives people can have.

They say you should write what you know. I’m not sure who “they” are, but it is wise advice. You can write about tasting cow brains using only your imagination, but if you’ve never done it, you probably wouldn’t think to say that it was the texture that was the hardest to get down—something akin to eating a grainy kind of play-dough.  Not fun.
I have never had the inclination to write a book in a European setting, or a Latin American setting. I don’t know those places. I could research, but it wouldn’t be same. Because I lived in Bangladesh, however, I came to know some of the Asian way of thinking. How it felt to try to remember not to point my foot in anyone’s direction or ever use my left hand or in some places never look a man in the eye. I know what it felt like to travel in a rickshaw through the haze of smoke and congestion of the city, what it felt like to see a robbery at knifepoint, or the swarm and clutter of over 130 million people cramped into a country not much bigger than North Carolina. 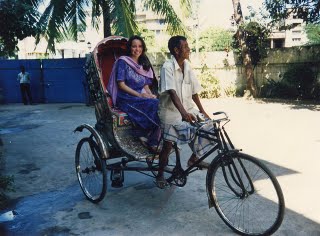 It’s what I know, so of course, when I was ready to write my first series, Christian suspense/romance novels on international human trafficking, I set them in South Asia. My character experienced the new culture firsthand, just as I did. And because it is what I know, I was able to express her feelings and reactions in a very real way.
Real is powerful. Powerful makes for a good story.
That’s not to say you can’t ever branch out. There are multitudes of writers out there who do excellent research and can weave a story that takes readers to places the author has never been, or into situations and feelings the author has never experienced.
However, I think the most powerful books I have read, even if they are fiction, seem to delve deeply into the author’s own personal experience—either through their own memories, or the subjects they are most passionate about, or the things they themselves are struggling with.
So what are you meant to write? If you’re feeling stumped, here are a few questions to ask yourself: What experiences have you had that would resonate with people? (Have you lost a spouse? Survived cancer? Traveled the world? Been mugged? Felt writer’s block?—ha, had to throw that one in there!)  What are you most passionate about? (What makes you most angry? Most excited? What topic gets your heart rate up every time it comes up?)

You have your own unique voice. Your experiences and goals and struggles and heartaches all combine together into something you can share with the world. Maybe your non-fiction story will help people deal with things. Or maybe your fiction story will entertain them while also resonating with their deepest struggles.
Whatever it is, it is you. Your most powerful writing will come when you write what you know, and what you care about, because that is who you are.

Related Posts: Why Do You Write?

Email ThisBlogThis!Share to TwitterShare to FacebookShare to Pinterest
Labels: authors, how to write, publishing, telling your story, True Stories from Bangladesh, Writing, writing a book, writing tips, You matter