Medical Mondays: When It's Just Too Much

It's been a rough weekend. Every day I live dealing with, adapting to, and adjusting to my collection of chronic illnesses. Some days feel stable and I don't really think that much about all my extra little habits. Other days are anything but, and the entire day is focused on what my body is doing (or not doing) and how I should respond.

Getting sick--an added sickness like a cold or infection--is always hard. It affects my other conditions, my medication, my schedule and of course, makes me feel yucky. Worse, it puts me on a tightrope-walking act of whether to treat it as something serious in the hopes that it won't become serious, or treat it as people normally would and risk it becoming something serious.

It gets complicated. And discouraging. To have to focus more and think better when you feel worse is just plain hard. And you want to cry. And then you try to tell yourself things like how thankful you should be, that so many people have it much worse, that you shouldn't complain, etc., which is all true.

Yet some days it just feels like too much.

Know what I mean? Your too-much days may not be health related, but whether it's your job, your marriage, your uncertain future, the feeling is the same.

As I struggled my way through this sick weekend, I came across a story* about a little boy playing soccer. It was two teams of little kids, and the little boy was put in as a goalie. He was good, but the rest of his team was no match for the other side. The parents of the boy cheered him on as he played valiantly, despite the odds. They kept cheering even when the other team scored one then another goal.

The game got worse and worse until finally, the little boy just dropped to his knees and cried. It was just too much.

Now at this point in the story, I was wondering what would happen with the boy's dad. Would he be embarrassed at his son's weakness even though he was just a little guy? Would he tell him he shouldn't make such a big deal out of it? After all, think of the kids in Africa and all that?

In the story, the dad climbed down from his position and ran onto the field. Without apology, the dad ran right up to his son, picked him up for all the world to see...

And cried with him.

The boy told his father he just couldn't do it. He tried and tried but he couldn't win.

Again, the father could have responded in several ways. He could have told the boy it wasn't fair and given him the role of victim. He could have allowed the boy to quit and forever fed his feelings of weakness and failure.

Instead, he told his son to finish the game. The boy argued that he couldn't do it. He couldn't win.

He did not need to win the game, the father said. He needed to get back in there and do the best he could; that was what mattered, and he was so proud of him. In doing so, he gave the boy a way to be a victor even when the circumstances held defeat. He made him more than a conqueror.

The boy got back in the game, but with a different goal: to do his best and make his father proud. In the end, his team was defeated, but the boy was not. 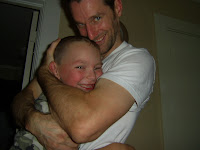 That story was important to me this weekend. I often feel like there is no way to win against living with sickness and disease, and in a way, that is true. I can't keep these things from ever happening. I go to God in helpless frustration, stopping the game, embarrassed at my tears, and I tell him I can't do it. I try and try but I just can't win. I'm not strong enough.

He says that's okay. In fact, He says His strength is made perfect in my weakness.

If you're feeling like things are just too much right now, know these two things:
1. If you belong to Jesus, this is temporary. Even if you struggle will last the rest of your life, it is still so temporary compared to eternity.
2. You are loved through every moment of it. Even when you feel alone, abandoned, afraid and rejected, nothing has ever separated you from the love of Christ, and nothing ever will.

It's okay to let the game stop for awhile, drop to your knees, and cry. Tell your heavenly Father all about it--every bit--and let Him hold you. Then, get back in, knowing He's cheering you on.

As a father pities his children,
So the Lord pities those who fear Him. Psalm 103:13


*story from "hugs to encourage and inspire" by John William Smith

Related Posts: Give Yourself Permission to be Sick